I grew up in Fargo, ND and attended the Minnesota State University Moorhead where I completed by Bachelor's Degree's in both Sociology and Criminal Justice. During this time I began working at the Courtyard by Marriott in Moorhead and joined the RMC team when they purchased the hotel.  I took a brief hiatus from RMC when I moved San Diego, California where I worked for a 600 room full-service Wyndham property. I returned to Minnesota to marry my wife, Ashlyn, whom I had met at the Courtyard. in 2020 I rejoined the RMC team at the Springhill Suites St. Paul before being promoted to General Manager of the Hampton Inn and Suites St. Paul in 2021. My interests include all things nerd-related: Star Wars, Dungeons and Dragons, Video games, Physics and more. 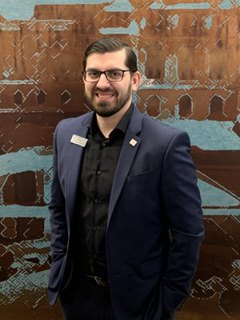